Drillhole planning in Micromine previously focused on generating a pattern of drillhole collars in plan view. Drilling directions, inclinations and depths could be approximated and added to the collar data, before setting up a drillhole database to check the position of the resulting traces in 3D.

This simple process was good for creating a uniform grid of drillholes. But to produce numerous drillholes of varying orientation and depth was iterative and time consuming because the parameters had to be defined, checked and modified until the traces were in the correct position.

Drillhole planning has been overhauled in Micromine 2016 to provide a completely new set of tools. These allow drill hole traces to be drawn as strings and then converted directly to collar and survey files. 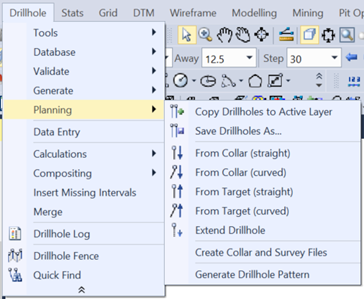 Drawing the traces as strings provides access to the wide-range of drawing and editing tools in Micromine. This means that you can quickly and interactively produce more intelligent holes that start, finish and intersect features exactly where you want them to.

The From Collar tool can be used to plan a trace from the surface. Simply click on the surface location where the collar is to be located, define the length and direction of drilling, and immediately a new trace is drawn. 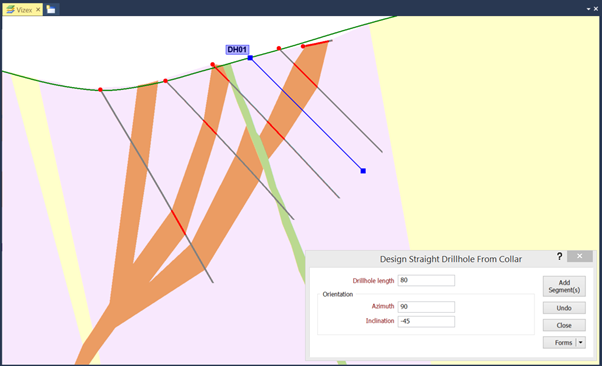 Alternatively, the From Target tool can be used to plan a trace from a target to the surface. Use this tool to snap to the target (a wireframe of the mineralisation for example), then define the length and orientation of drilling to produce a new trace. There are additional options to snap the collar to the topographic surface and to extend the trace a certain length beyond the target, defining the exact length of the hole in a single step.

Both straight and curved holes can be planned from the collar or from the target.

Existing traces can be replicated using the Copy Selected Drillholes tool. This tool copies the trace to the active layer where it can be interactively re-positioned. 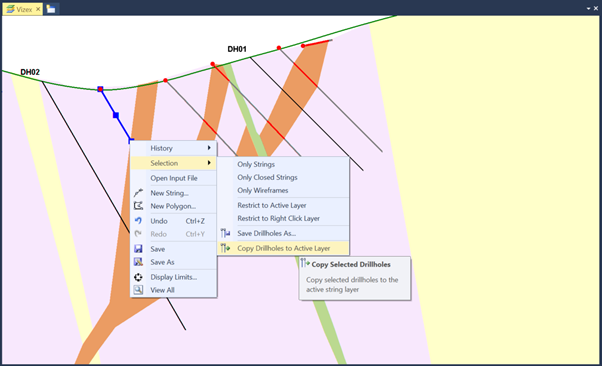 Once moved to a suitable location the depth of the hole can be adjusted with the Extend Drillhole tool. 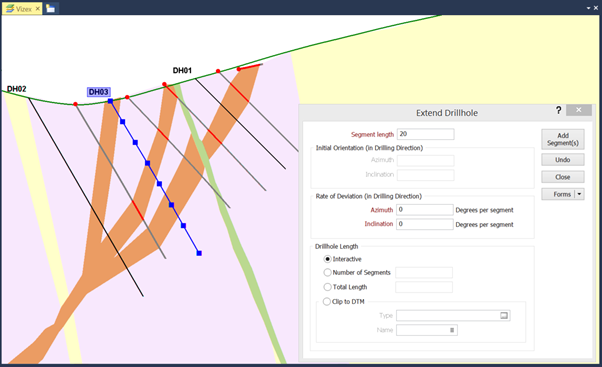 Copied and moved trace DH03 is made deeper using the Extend Drillhole tool.

Time is saved by defining an alphanumeric collar name in the JOIN field of the string file. Each time a new string is created the collar name will be incremented by one, automatically naming each hole.

All that remains after interactively planning the traces is to convert the string file into drilling data with the Create Collar and Survey file tool. 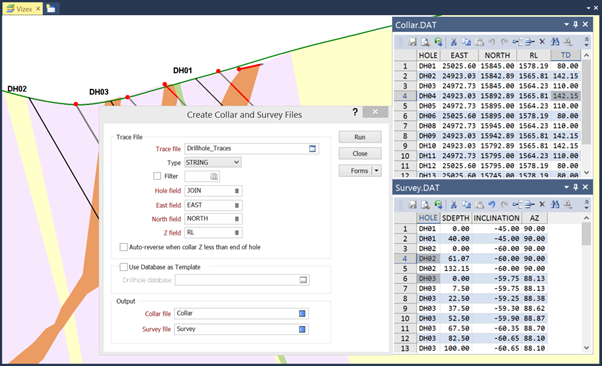 These new features in Micromine 2016 will improve your Drillhole Planning experience.

Accuracy- Interactively drawing the traces using strings means that you can position them exactly where they need to be.

Simplicity-The tools are easy to use and since they use strings, which are an existing feature, there are no new skills required.

Speed- Strings are quick to create, modify and validate, and they’re converted to drilling data in one single step.