fbilki (Moderator / Admin (AUS)) 8 years ago in Resource Estimation • updated by ronald reid 8 years ago • 4
Using the variogram map is conceptually pretty easy: you configure the best display from the source data and use that to identify the zones of greatest continuity in three dimensions. But in the real world things aren’t always so straightforward.

Here are four tips for understanding what’s really happening on the map:

Tip #4: What appears to be continuity … sometimes isn’t

Have you ever driven past a vineyard and noticed how the posts all seem to line up at certain angles? The same thing can happen with drillholes situated on a very regular drilling grid, and if these chance alignments coincide with a map direction they may create what appears to be a direction of strong continuity. 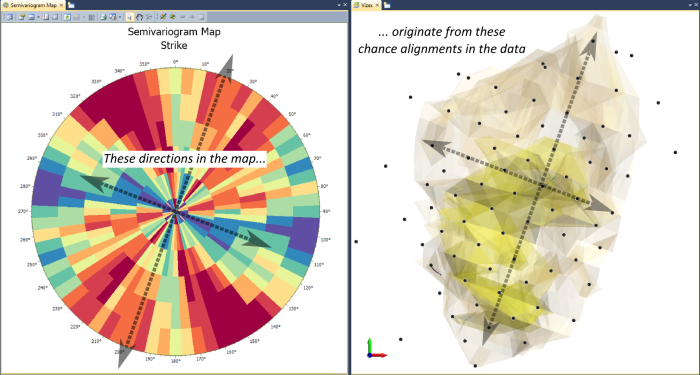 This mineral deposit is only weakly anisotropic. Much of the anisotropy visible in the map is concentrated around the first two lag intervals, but when you compare the directions to the drillholes in Vizex it is clear that they match the between-hole alignment

Always use your knowledge of your project area to validate any candidate directions, and be prepared to ignore any directions that are the result of chance drillhole alignments.

Sometimes the dip or pitch map shows a very steep zone of strong continuity. Don’t worry, your orebody isn’t standing on its end: it’s just another effect of your drillhole data. 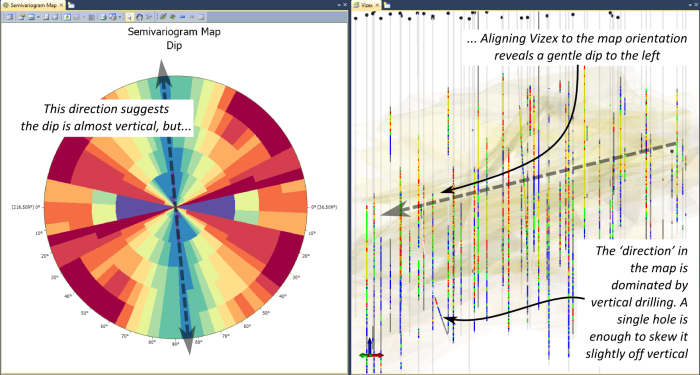 This dip map suggests that the orebody has a nearly vertical dip, which contradicts the geological setting as shown in the Vizex cross section. This direction is driven by the predominantly vertical drilling, not the geology. The correct direction is the more subtle sub-horizontal one

The solution is straightforward: use your knowledge of your project area to validate the directions, and ignore any that don’t make sense.

Tip #2: Align Vizex to the map orientation to really understand what you’re seeing

The best way to really understand what the map is showing you is to view the data in Vizex with the display oriented parallel to the map plane. Along with providing an obvious reality check and helping you to understand your data, it also reveals the cause of any fake continuity from chance alignments or overabundance of data in any single direction.

In the Tip #3 image Vizex is aligned parallel to the variogram map, making it very easy to visualise the effect of the drilling.

Tip #1: Always click the Calculate True button before measuring a direction on the map

The interactive map simplifies its calculations to give you the fastest real-time updates as you refine its processing parameters. Clicking Calculate True forces the map to recalculate itself using the full dataset. The differences between the interactive and true maps are generally very small, but you want to ensure you are looking at the real data before measuring a direction. This is especially important if you make any interactive bandwidth adjustments.
Vote

0
ronald reid 8 years ago
Too True Frank - I have seen quite a few search ellipses and variograms that do an excellent job of modelling the drilling direction - with no relevance to geology at all, and many of these have been modelled using variogram maps. An easy way I use to ensure I am looking in the right direction is Maximum Intensity Projection (MIP) - an Xray of the grade if you like. First you have to create a colour set based on the decomposed populations of the data (not mandatory but does allow you to see the populations), then you have to sort the file - sorting grade from smallest to largest. If you load the composite file into Visex and turn off depth_testing - here for those who may not know;

You activate MIP in Micromine, this way you can easily find;
the strike:

and the plunge (where all the grade groups together);

I find this used in conjunction with the variogram maps an excellent way of obtaining the true grade continuity directions - rather than relying on the variogram map alone - telling me the drillhole drilling direction! Now if I had a way of drawing a line down the grade in the plunge image above that gave me the dip, dip-direction and pitch of the grade in view that would make life really simple!!

0
Under review
fbilki (Moderator / Admin (AUS)) 8 years ago
Very good point, Ron. Perhaps we could make the new "align" option work both ways? Then you could align Vizex how you wanted and send that information to the map. Actually, it would probably be more practical for the map to ask Vizex for its orientation instead. Not sure how practical that is but it's worth investigating.

For now, I guess the simplest way to achieve what you need is to extract the azimuth and inclination of the Vizex view from the Display Limits dialog. Or, another way might be to run a measurement along the trend and then extract the orientation information from the Properties window.

0
Under review
fbilki (Moderator / Admin (AUS)) 8 years ago
Just following up on Tip# 2 (aligning Vizex to the map orientation). The Align Vizex View toolbar button will be added to Service Pack 1 of MM 2014.

It's easy to use: just click it to align the Vizex window to the plane of the current map. (Any direction measurements on the map are ignored.) It will align the first Vizex window if multiple windows are open.

0
ronald reid 8 years ago
Sounds like a great addition.